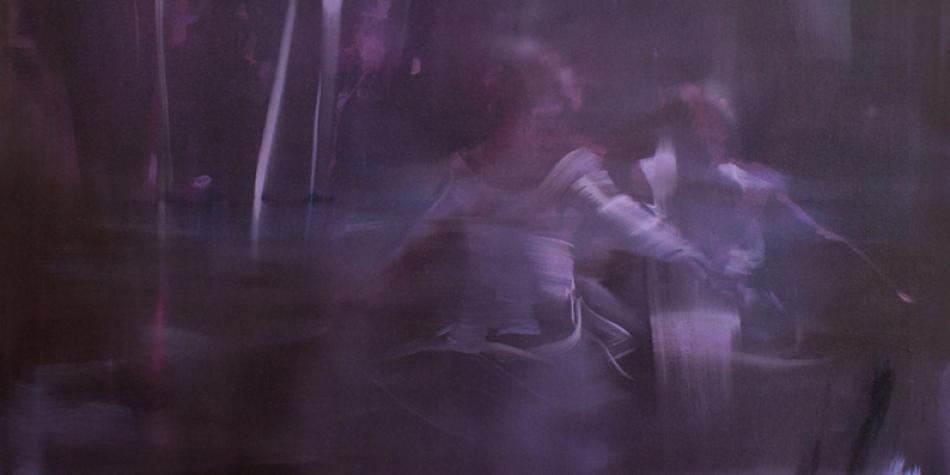 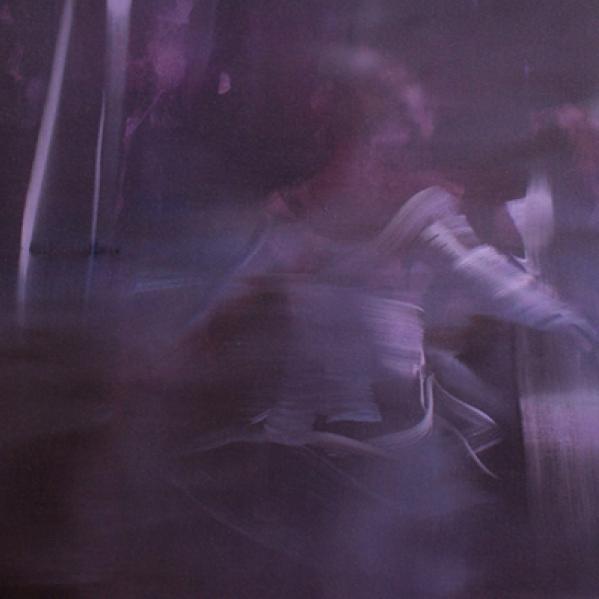 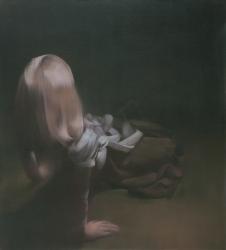 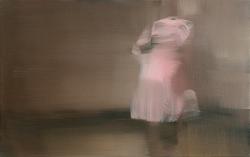 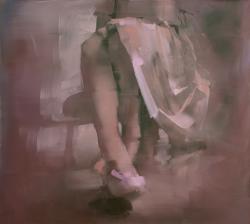 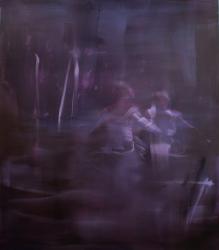 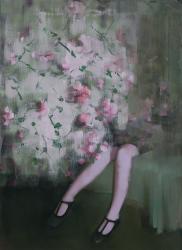 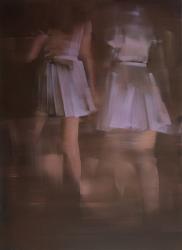 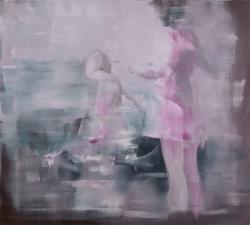 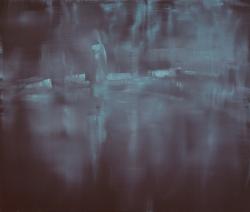 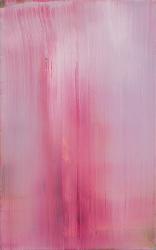 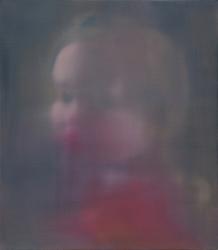 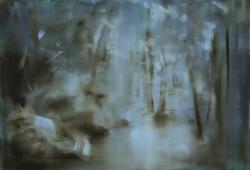 Born in Helsinki in 1959, Tiina Heiska studied Fine Arts at the Helsinki Academy of Fine Arts and at the University of Art and Design Helsinki UIAH. She had solo shows in Helsinki, Paris, Brussels, Stockholm, Oslo and Malmö. Her works are in private and public collections, such as Wihuri Foundation, Helsinki Art Museum, Amos Anderson Art Museum, The Finnish State Art Collection, The Saastamoinen Foundation, Sara Hildén Art Museum, Heino Art Foundation and Oulu Museum of Art.

The Body and the Universe – Encounter in Tiina Heiska’s Art

In her paintings, Tiina Heiska depicts the human condition, our contact with ourselves and existence. The viewer’s identification with the experiences and spatiality in these paintings is achieved by the depiction of figures and an indistinct space that has been taken onto a virtual, nearly abstract, level. Systematically and with a firm hand, Heiska constructs a dramatic tension that forces us to consider the origin of the depicted scenes and spaces and our own connection to them.

Through the use of a physical technique that reveals the very process of painting in a documentary way, Heiska brings a palpable sense of the artist’s presence into the works. Wide brushstrokes of eye-catching colour attest to the moment of the painting’s making. Time seems to have been arrested in the strokes, they reveal both the motion and the speed of the artist's hand. Examining the paintings, one cannot but notice how the artist’s physicality and energy are present everywhere. The intensity of colour is minimal and monochromatic, yet powerful. The colour is also subordinate to the atmospheric light and motion that are rendered through the shape of the figures and the strokes. Colour has an almost graphic function in Heiska’s works, often mutating from a signal hue into an extinguished tone or an almost aggressive blast of colour. In its monochromaticity, however, the colour is very harmonious, with a distinct, physical form. Its physicality is not based on volume or thick layers, but on intentionally subtle brushwork that establishes both a surface and a depth.

More than a Shell

The figures in Heiska’s paintings emerge from an anonymous space, a dim exterior or interior space that is not homey or personal, but sterile and transitory, like a hotel room or a bare stage. Neither the place nor the time is identifiable. The space of the painting often has a mysterious quality, it is voluminous and cyclic – it seems to enclose the figure that is diffuse, disappearing into the dimness, as if enveloped in veils.

The dramatic tension in Heiska’s paintings is created by the corporeality of the figures, their postures and the motion depicted thereby. One gets a sense of an event – something is happening or just about to happen. The figures are deprived of all personality and they move on a general plane – they might be characters in a play who have prepared for this particular situation. The figurative quality is underlined in many paintings by the character’s clothes and accessories. Heiska alienates the figures by making them turn their back to the viewer and look away or to the side. Dissociated from their individuality, the characters are immersed in their own world, body and space. It is to this world that Heiska gives access also to the viewer.

Heiska’s paintings employ a feminine perspective, nearly all the characters in her paintings are women or girls. By evoking gendered stereotypes and attributes, Heiska elevates the artist’s personality and subjective viewpoint into generalised experience. The private merges with the general. Although it may initially seem that feminine consciousness, the depiction of a woman and a girl, resonates with the artist’s own gender, own corporeality and experiences, at the same time Heiska defends the difference and specificity associated with womanhood on a more general level. In a way, it is completely natural that the people depicted by Heiska are women. By evoking the theme of duplication and different generational imageries, Heiska also explores the theme of continuity and growth that is associated with womanhood.

The figure in Heiska’s paintings is often a child or a young girl, shown in front of a mirror, accompanied by another or several almost identical or sisterly figures, which creates a powerful sense of a bond between the figures. The duplicated figures complement one another, almost as if they were chained to each other. The girl’s figure and character are implied, her body like a cypher, the details of face, hands and feet dispersed into the space. Gender is only recognisable by her hair and the accessories, traditional attributes, braided hair or clothes. The girls’ short skirts are nostalgic while being also functional and carefree. These emblems are timeless, but they also evoke innocence and a lost time.

What does Heiska allude to with her pictures of children? What is the significance of presenting a child’s viewpoint? A child’s reality and worldview are different from those of an adult. A child’s experience is intensely bound up with the senses, particularly with movement and physical perception. The way a child faces reality and experiences leaves its traces in us. When a person changes upon maturing, childhood sensations and experiences seem to disappear altogether, but they return – sometimes as powerful physical flashbacks – or strange and distant, like ghosts, and unconsciously, through the body. The manner in which an adult relates to motion and appropriates space with his or her body is no longer spontaneous and natural as is a child's interaction. We do not run willy-nilly from the living room into the kitchen, jump for joy on a forest path, or curl up to sulk in a corner at work. The woman depicted by Heiska is often pensive, motionless, or even more static than that. With her probing and serious gaze turned on herself and her body. Through her works, Heiska establishes a link to these bodily changes and sensations, to our powerful corporeal existence and experientiality.

A device Heiska often uses in depicting people is the mirror image or reflection. Figures are duplicated, one cannot be certain whether one is seeing two figures or one with a reflection. The characters are simultaneously present and distant, inside and outside of themselves – exploring and searching. This reinforces the sense one has of a kind of disconnectedness and a consequent desire for closeness, to find the other in oneself, to experience something more powerful and intense. Reflection exteriorises the self and provides an opportunity to see oneself as the other – through the eyes of an outsider. This experience is one of the earliest stages in the development of one's sense of self. In his theory of the mirror stage in the development of self-identity, the French psychoanalyst Jacques Lacan (1901–1981) underlined the importance of the experience of recognising oneself in the mirror and other forms of behaviour based on observation, mirroring and reflection. Our self is constructed from the very beginning through a process of alienating reflection: I am the Other. The ideal self in the mind is created on the basis of the other’s imagined gaze. Through the mirror image, we construct a narcissistic perfection or aspire to a comprehensive picture of ourself.

In his texts on perception, the French philosopher Maurice Merleau-Ponty (1908–1961) discussed the relationship of the individual to his or her own body, and the problem of the objective observation of one’s body. One cannot observe oneself from the outside, yet there is a unique aspect to the bodily experience – we are simultaneously the object and the subject. We can observe and be observed at the same time. The drive for a unity of mind and body is the ideal in Merleau-Ponty’s philosophy of the body and corporeality, in which the body constitutes the crucial bond between ourselves and being. The philosophy of Merleau-Ponty is also a natural framework for examining the world as presented to us in the paintings of Tiina Heiska, where the physical form holds a special significance – it is a key and a link, a tool for finding meaning and identifying with states of mind, sensations and experiences. The viewer too gets a bodily sense of the figure in the painting, a feeling that does not necessarily have to be defined in any other way.

In spite of the innocent first impression, the mood in Heiska’s paintings is intense, dark and filled with tension. In her paintings, Heiska explores human solitude and privacy, yet not as a social phenomenon, but rather as a fundamental existential condition. In the paintings, corporeality focuses the gaze to turn it onto the self, deep inside the issues of being, lived moments, and also in part into the unconscious self. Its image is always ephemeral, akin to the surface of water, and therefore endlessly captivating. 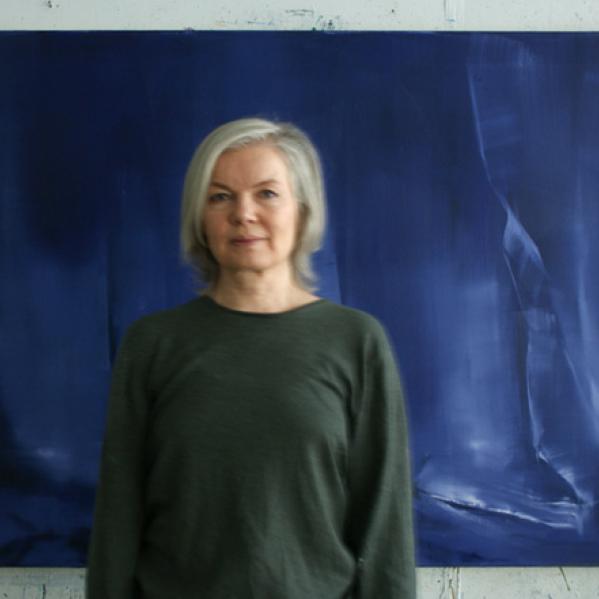